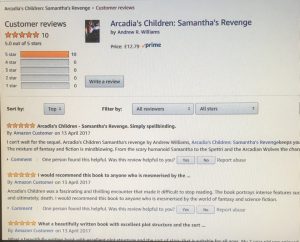 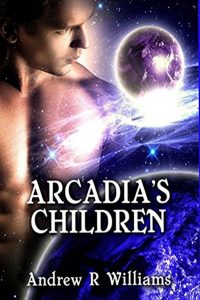 Arcadia’s Children: Samantha’s Revenge is a fascinating sci-fi novel filled with adventure and action. Written in the third person perspective, the book alternates between various characters.

The story takes place on a planet named Arcadia and a moon called Arden. Arcadia is an Earth type planet so it is capable of supporting life. However, colonization on Arcadia is restricted because dangerous pathogens could transfer from Arcadia to other planets. Only archaeological teams and palaeontologists are allowed to travel to the planet, but the native people of Arcadia, known as the Ab, are not allowed to travel outside of the planet.

In Arden, a sudden noise in Ord Morley’s house causes him to get up from his bed and go downstairs. As he searches around his house, he finds the cause of the noise. The intruder is a protection droid named Alex who makes Morley connect to a recreational thought transfer cartridge(RTTP) which captures the thoughts or experiences of someone and allows someone else to view them. In this case, the RTTP has the experiences of Mick Tarmy, a detective corporal, who was ensnared in a plot to destroy the Great Ones. The Great Ones and the spettri are mind readers who are searching for a way to leave Arcadia and take over Arden. When Tarmy is blackmailed to join Samantha, a humanoid, in her quest to destroy the Great Ones, he learns a shocking secret that forces him to rethink his actions. With no choice but to do Samantha’s bidding, he risks his life as he travels to the restricted planet known as Arcadia.

The author does a great job building the suspense and there were some surprising twists to the plot. There were many subplots that were integrated into the main storyline which made it complex, but interesting. The story starts off in the present and flashes back to all the events recorded in the RTTP. There were multiple characters in the novel, and all of them played an integral role in the plot. The author vividly described each of the characters and how each of their choices impacted the rest of the characters. Even though there were so many characters introduced in the book, I found it easy to keep up with the names and roles of each one. Mick Tarmy was one of the most realistic characters in the book. He had many faults and doubts, but he manages to overcome them.

Overall, I would rate this book a 4 out of 4 stars. I thoroughly enjoyed reading this book. It was easy to follow and the ending made me want to read the next book of the series. I would recommend this book to those who like to read sci-fi/fantasy books.

Amazon Prime 5 out of 5 star